I’ve got the amazing YA author Cherie Colyer visiting today, and there’s something important you need to know:  Challenging Destiny is FREE on Amazon until May 17! I snagged mine, but you’ve only got one day left, people, so hop to it!

Being Chosen is a terrible thing when

there’s no one you can trust.

Logan Ragsdale and his younger sister, Ariana, have been marked, chosen to be unwilling participants in a war between angels and demons.

Logan can sense something’s not quite right. Like an unexpected chill on a summer’s day, he can feel the unseen closing in. He’s had these feelings before and, each time, someone close to him died. He’s afraid this time it might just be Ariana.

​Logan’s fears are soon confirmed when he discovers their new friends aren’t human, but rather representatives from Heaven and Hell sent to Earth to ensure he and Ariana accept their roles in an ancient prophecy. Demons want Logan to open the gates of Hell. Ariana has the power to stop them, but if she chooses to side with Heaven to spare the lives of thousands of innocent people, she’ll damn her brother for eternity.

Together, they must derail the biblical event if they hope to save themselves and the future of mankind…but what price are they willing to pay to keep the other safe?

And now, for some author torture questions. I assure you, Cherie answered these voluntarily…eventually. 🙂

CJ: In Embrace, Madison and her newfound magic (not to mention Isaac) are so interesting…do you plan to write any more books in the Embrace Series?

CC: I’m so glad you like them. Hold Tight, book two in the series, is now available, and I’m almost finished writing the third book.

CJ: In your newest release, Challenging Destiny, who is your favorite character and why?

CC: Oh, this is a hard one, because I really like Logan and Ariana. But I’m going to have to say Kira Rose. There’s more to her than meets the eye, as Logan and Ariana quickly discover. She’s impulsive, hates to lose, and time has made her ruthless. But she’s also passionate and she fights for what she wants. She’s very human, even though she’s not human at all.

CJ: Do you prefer to write kissing scenes or fight scenes?

CC: I actually enjoy them both for different reasons. I love the romance in kissing scenes, and I like the challenge of making a fight scene come alive.

CJ: What would your DJ name be?

CJ: What are you currently reading?

CC: Speak of the Devil by Shawna Romkey

CJ: Which character of yours would you like to meet?

CC: Caden from Hold Tight. He’s been around a long time, has seen empires rise and fall, met a lot of people, loves music, art, and literature… a conversation with him would be fascinating.

Book Boyfriend: Bones from One Foot in the Grave by Jeaniene Frost.

TV show: It was the Vampire Diaries, but the verdict is still out on this season.

Shoes: In spring/summer, my flip flops. In fall/winter, dress boots

Artist: I’m always adding to this list, so there are too many to name. I recently discovered Josephine Wall.

CJ: The baseball fan in me will let that slide…this time.

CC: Thanks for having me here.

CJ: And thanks so much for squirming through my torture session!

Sometimes you end up hurting the ones you love.

You find you can’t save them or yourself.

Madison is familiar enough with change, and she hates everything about it. Change took her long-term boyfriend away from her. It caused one of her friends to suddenly hate her. It’s responsible for the death of a local along with a host of other mysterious happenings. But when Madison meets a hot new guy, she thinks her luck is about to improve.

Madison is instantly drawn to the handsome and intriguing Isaac Addington. She quickly realizes he’s a guy harboring a secret, but she’s willing to risk the unknown to be with him.

Her world really spins out of control, however, when her best friend becomes delusional, seeing things that aren’t there and desperately trying to escape their evil. When the doctors can’t find the answers, Madison seeks her own.

Nothing can prepare her for what she is about to discover.

Dangerous, intoxicating, and darkly romantic, Embrace is a thriller that will leave you spellbound. When you’re new to magic, one spell can be the difference between getting what you want…and ruining the lives of everyone you love.

Sixteen-year-old Madison has just embraced her magical powers. The trick now is learning how to control them. She and her boyfriend -and fellow witch- can’t even enjoy a simple kiss without getting shocked when their powers collide. Instead of mastering her new skills, though, Madison is stuck watching her kid brother and doing chores.

But being a witch does have its benefits. With a simple spell, Madison instantly conjures the help she needs around the house. Or so she thinks. Her idea of “help” invites trouble of its own as a pair of dangerous yet enticing beings enter her life. When a classmate disappears soon afterwards, Madison discovers she’s the next victim of a threat she’s powerless to resist…and there’s nothing it won’t kill to make her surrender.

Caught in the crossfire between two dashing but deadly creatures, Madison must figure out which one to trust and how to rid her world of the other—before one of them destroys her and everyone she cares about. 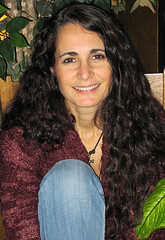 Cherie Colyer is the author of  YA and NA paranormal thriller/romance, EMBRACE (available now), and HOLD TIGHT from Omnific Publishing, and CHALLENGING DESTINY from The Wild Rose Press (2014). Check out her website and blog for news on her books and bonus material. Follow Cherie on Goodreads, Twitter and/or Facebook for updates on writing, book and special offers.