Help me celebrate with J.C. McKenzie as her debut novel, Shift Happens, goes to paper today! Woo-hoo! There’s a giveaway going on, not to mention, I coerced…er, sweet-talked J.C. into answering a few fun questions. Annnnnnd, here we go!

CJ:  As a martial artist myself, I love how Andy isn’t a cookie cutter kick-ass shifter-girl. She knows her stuff. What’s the scoop on your martial arts experience?

J.C.: You picked up on that, eh? In Shift Happens, I definitely tried to bring in my personal experience and knowledge of the different martial arts forms and hope it gave Andy a more authentic edge. I mentioned several styles: Goju Ryu, Shotokan, Kempo and Krav Maga. Although I do have a bit of experience in martial arts, I can’t claim to be a master or expert in any of them.

When I was in high school I practiced Goju Ryu, a form of Karate, and earned my purple belt before moving to go to University. I was weeks away from the blue belt grading and a bit pissed because that level had all the really fun jumping (tobi) kicks in it (I practiced them anyway). In a new city (Vancouver, BC), the nearest dojo for my style was an hour bus ride away, and as a university student paying my own way, I couldn’t afford the dojo membership fees anyway. I used to practice my katas at night on the abandoned tennis courts next to my dorm, but eventually my skill and dedication faded.

Years later, my husband and I joined Choi Kwang Do (a blended style), but I didn’t enjoy it as much. I think we all remember our first loves, martial arts included. So I gave a little “shout out” to my first style!

I now live in rural Saskatchewan, so no karate skills are being honed at the moment, but I desperately want to get back into a dojo one day. *sigh*

CJ: Yep, kicking is the best part of martial arts!

JC:  Mmmm Tristan. The Wereleopard Alpha with the face of an angel and a sin-provoking body? That Tristan? Meeeeeow. Well, he comes back in the second book…

…And he has a secret.

CJ: Of course he does!

CJ:  If you became a shifter, which one would you choose and why?

JC: Oh, good question!! I would be so torn. Flying would be so cool, and I’ve always been drawn to wolves, but I think I’d become a mountain lion, because they’re pretty badass on their own and don’t have to depend on a pack.

CJ: I admit, I was partial to Andy’s mountain lion. Nice kitty, kitty.

CJ: Would you rather be Clint’s toy or Lucien’s property…and why?

JC: Oh my gosh! Oh my! LOL! Thank you for this question. I just giggle snorted my energy drink all over my computer screen.

Er, I hope that wasn’t too much information.

I really enjoy writing Clint, but he’s a bit rough on his lady-friends. That being said, Lucien’s a total dick, would drink my blood and probably make me do worse things than his human servant. I’m going to go with Clint on this one! Plus, I’ve always had a thing for strong shoulders.

CJ: Not a choice you’d want to make in real life, right? 🙂

CJ: What are you working on now?

Book boyfriend: Too many to choose from!

Comeback line: That was mean. (I’m nothing like Andy! Usually I’m sniffling or blinking back tears if someone verbally picks on me. That’s why I find Andy so fun to write. She’d kick some ass or have a witty response.)

WHEN AN ASSIGNMENT GOES WRONG, ANDY MUST FIND OUT WHY OR FACE ETERNAL ENSLAVEMENT. 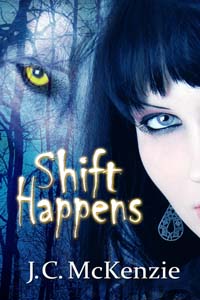 Andrea McNeilly’s job as a government agent is not asking questions, but then a routine assignment turns into a botched assassination of a Master Vampire’s human servant. Answers become a priority. Her search to discover the truth is riddled with obstacles, the largest being an oversized Werewolf who resembles a Norse god. Andy can’t afford the distraction he offers, because if she fails, she faces eternal enslavement.

A large black wolf trotted into the clearing to confront me. He had a white-tipped snout, white boots and mitts and would have looked cute had he not been the most intimidating Werewolf I’d ever seen. Standing tall and solid, power rolled off of his body. His eyes bore into mine. I sniffed the air. The strong Werewolf scent of rosemary swirled around me, strong and seductive, laced with sugar. A weird fuzzy sensation spread out from my chest. Whoa.

My other form growled low, demanding release, straining against my skin. The energy of the wolves built—layers upon layers of excitement and impatience. The air pulsated with anticipation. They could sense the imminent kill.

Let me out! My other form repeated, throwing her power against my built up walls, howling in defiance.

When the energy of the Werewolves surged, I finally released her. My wolf form flowed out fast, wiping out the feline in little more than a heartbeat. Smaller, weaker and the size of a natural wolf, a Shifter in this form was no match for a Werewolf, especially a dominant one. I had time to meet the eyes of the Alpha for only an instant before the pack leapt forward. My limbs shook. It went against every instinct ingrained within me, but I rolled onto my back—submissive.

GIVEAWAY!!! Enter for a chance to win a signed print copy of Shift Happens (for U.S. – ebook for all you outsiders :)) PLUS, there’s a $25 Amazon gift card up for grabs! Contest ends August 6.