I am thrilled to be a part of Rebekah Ganiere’s blog tour for Snow the Vampire Slayer, the second in her Farielle Series, released on September 22. I enjoyed Red the Were Hunter very much, and Snow’s story is definitely on my TBR list. Here are the deets: 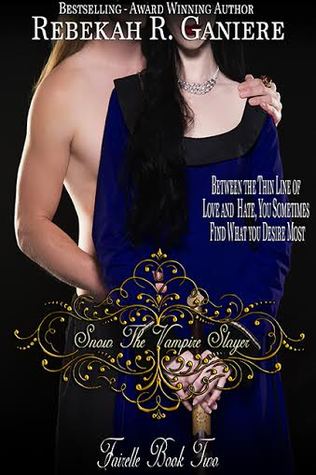 Lady Snow Gwyn is tired of playing “mother” to her seven Vampire Slaying brothers. For the past two years, she’s yearned to be out there fighting at their side as they hunt for bloodsuckers in the black of night. Snow is as good a fighter as any man, but she wasn’t called to be a Slayer. A mere formality in her book.

Prince Sageren, Son of Lothar has spent the last fifty years in exile, awaiting the day when he can finally avenge his family and take back his throne. Barely existing, he’s forced to face his inner demons and the monster he once was, compelling him to vow to never drink from humans again. A simple enough task–until he crosses paths with a human who makes his fangs ache to drain her.

When Snow runs into Prince Sage on a late night trip to the woods, she’s torn between the urge to kill him and the desire to succumb to the feeling he stirs within her. And when Snow’s life is threatened by the same evil that murdered his family, Prince Sage must enlist the aid of Snow’s brothers to not only help him save her life, but to also regain his rightful place as King of the Vampires.

If Sage can keep the Slayers from killing him first. 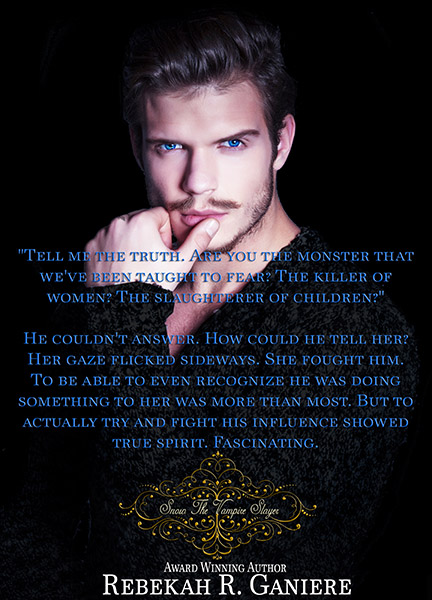 “You should go.” She raised her sword again.

He watched her with an intensity that made her shiver. She backed up a pace. Midnight rendezvous were fanciful in storybooks, but in real life they rarely ended well. Trusting a stranger was not only reckless, it was stupid, and she wasn’t stupid.

“I’m not going to hurt you, love.” He put up his hands and smiled. His pearly teeth shone.

His manner was fine, as was his speech, and yet there was something so predatory about him that scared her.

“Snow.” She swallowed hard and waited to see if he recognized her name as the youngest of Lord Gwyn’s children.

It appeared he did not.

“Where are you from? I don’t recognize you.”

He continued to smile. “You’ve been introduced to everyone in the area?”

Embarrassment heated her cheeks. “Most people, yes. And a man of your speech and manner is someone I’m sure I would have been introduced to, or at least heard of before.”

Sage stretched and rubbed his chest. “‘I’m not from here.”

His voracious stare made her stomach flutter and her heartbeat quickened. “Are you from Wolvenglen?”

He laughed lightly. “I’m no werewolf, if that’s what you’re wondering.”

She scanned for a means of escape, but from where he stood, the only direction to go was opposite where she needed to be.

A peace fell over the grove and her skin grew warm and comfortable. Her feet sank into the ground as if she had suddenly sprouted roots.

He moved closer. In the burgeoning dawn, his face came into full view for a split second before he stepped into the shadow once more. He was handsome, with high cheekbones and a regal nose that gave way to crimson lips.

He stopped a foot from her and pushed down on the tip of her sword, causing it to hit the grass with a soft thud. His gaze locked on hers and she shuddered.

“How would you know where I’ve been?” Though she couldn’t seem to get her body to move, she refused to give over her mind.

“Because I would have remembered if you’d ever visited.”

“And you know every person that visits your lands?” 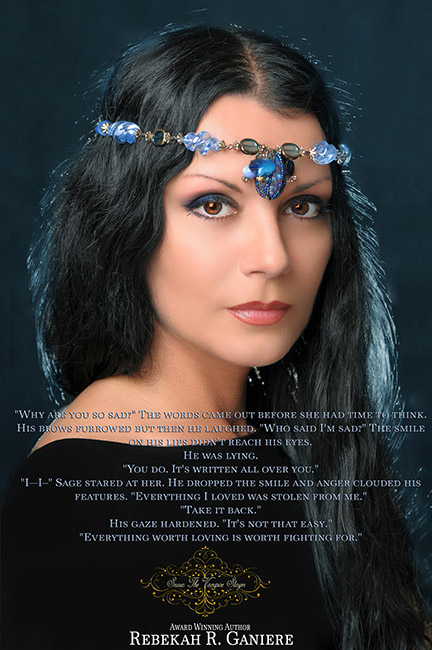 Rebekah is an award winning author. Her novel Dead Awakenings, debuted in January 2014. Red the Were Hunter, the first in her Farielle Series, released in May. The second book Snow the Vampire Slayer will be releasing in September 22, 2014. And her trilogy The Society will be released Nov. 17th 2014 by Kensington’s Lyrical Press.

Rebekah is the VP of Communications of the RWA FFP Chapter as well as a member of her local Los Angeles and Orange County chapters. In her spare time when she isn’t writing you can find her moderating on SavvyAuthors.com or hanging out with her husband, four children and her English Bulldog, rabbit, two bearded dragons, and two tortoises. The escaped snake has yet to be found.