Skip to Content
Home / Blog / Books / New Release! Other Than by Mia Celeste

I’m so excited and beyond psyched to share with you a brand spankin’ new release by debut author Mia Celeste! Mia is one of my favorite writer people in the world, a lovely person and brilliant writer. Today, I’m sharing an interview with Mia, who was kind enough to answer all my snoopy questions, as well as an excerpt, and my review of Other Than. Isn’t the cover fabulous? It only takes one drink from the Water of Immortality to kill Evie Woods—halfway. Trapped in undead flesh, the world’s last skin-slider wakens on an island purgatory where a cursed spring bubbles with immortality, and zombie cannibals crave living flesh.

Her only hope of escape rests in the hands of the one man who would see her fail. Bound to her by cords stronger than death, Lord Victor Lowell is both the man of her dreams, and her darkest nightmares. Contrary and intractable, Victor preys on others to maintain his angelic charisma and preternatural prowess. Drawn to the compellingly gallant and vulnerable soul behind his mercurial humors, Evie can only watch as protecting her forces Victor to sacrifice yet more of himself to the ancient evil long tethered to his soul.

Trapped in an ever escalating war they can’t stop, Victor and Evie fight time for a cure, but as the long days pass blackness tears at Evie, ripping her thoughts from her one memory at a time. Victor will to do whatever it takes to prevent her from deteriorating into a rotting husk, even if it means dooming himself, but Evie won’t surrender his soul without a fight. Battle lines drawn, the soul mates resolve to find redemption or die trying.

CJ:  What inspired you to write such a unique, zombie-esque romance?
MIA: I was trying to think of a ginormous problem that would be big enough to require a novel’s worth of pages to solve. A fellow critique partner started a romance with the heroine dying.  I thought that’s it! Too bad I didn’t think of that. When I found out that I’d actually read her story’s prologue, I started Other Than.
CJ:  What scene from Other Than was the most fun to write?
MIA:  My favorite scenes are the Howler attacks and the different ways the heroine and the hero manage to rescue each other.
CJ:  Would you mind explaining to readers what a Howler is?
MIA:  A Howler is a zombie who hungers for human flesh. As a Howler dines on more and more humans his/her cunning and strength grows.
CJ:  Victor is a deliciously dark character—have you always leaned toward writing characters with an underlying darkness?
MIA:  No, I’m actually fond of kind beta males. That said, Victor’s compelling, smoking hot and very redeemable. His behavior improves throughout the story.
CJ:  Do you have a muse for Evie or Victor?
MIA:  I used the Bronte sisters’ heroes, Heathcliff and Mr. Rochester, for inspiration.
CJ:  If you could have any superpower what would you choose?
MIA:  I’d like to have Green Lantern’s ring, so I could change things with my imagination.

CJ:   Most life-changing moment?
MIA:  My life-change wasn’t a moment. It was the two years I spent in Egypt as a Volunteer in Mission for the Presbyterian Church after I graduated from college that set my life. That’s where I discovered I loved teaching English.
CJ:  What author do you love who doesn’t get a lot of hype?
MIA:  You.
CJ: Awwww, shucks. I’m blushing right now. 🙂
CJ:  What’s your current WIP?
MIA:  It’s a YA story where a villain changes sides.
CJ:  What are you currently reading?
MIA:  When a Monster Calls.
CJ:  Which character of yours would you like to meet?
MIA:  Elias Caster. He’s the top wizard in the Fairy Syndicate.

He materialized in the inky shadow.

Or rather his apparition did. His ghostly frame hovered before her, sinuous and lithe. Against his shadowed form, the string glimmered like liquid silver. Slowly he unwrapped her, tossing the spectral bands to the floor until a coil lay between him and her.
Something inside her chest fluttered. “You followed me.”
An accusation.
He nodded. With a slight shrug, he spread his hands. “You shouldn’t be alone.”
She wanted to turn, giving him her back, but her betraying gaze remained fixated upon him. When he paced around her, she waved him away. “Don’t.”
He caught her hand and placed an insubstantial kiss in her palm. “Let me help you…please.”
A gallant gesture, perhaps, but her skin-slider sensitivity noted the rigidity of his stance, the twitch along his jaw, and the slight narrowing of his eyes. How could he think of helping her when he was in so much pain?
Ordinarily, she might be grateful. Might…if loss hadn’t hollowed her.
She ripped her cooling flesh from his spectral arms. “I don’t deserve kindness.”
“Good.” He gave her a rakish smirk. “Because I’m not kind.”
She shook her head, biting back the emerging smile that had no place on her countenance. She couldn’t be civil, couldn’t risk the involvement. “I can’t go on like this—stuck betwixt life and death.”
“You must. Don’t you see, sweet dove? You’re beyond both. You’re immortal. Like me.”

There are so many things I love about Other Than, it’s hard to know where to start. It’s told in a point of view with an old fashioned flair – once the main character, Evie, said “zounds” I was in! Archaic words happen to be my catnip. To stay in that olden days thread, there was also an herbalist apothecary, and between him and Evie, you get some great natural remedies. Gardening, another of my favorite things (without the weeds, thank you very much). There’s an antihero, my favorite type of hero, and horror among the romance. I’m not into sugary-sweet most of the time, so yeah. I was invested. But beneath all those goodies, the underlying themes of the story are what killed me (in a good way). There’s the theme of redemption, that we’re never too lost or too fallen to be saved. There’s hope, that no matter how desperate and dark the world seems, you’re never alone. There’s conviction, that people are worth fighting for, no matter how unreachable they appear. These are things I can never be reminded of too often.

So, the story itself. Evie is a doctor’s daughter, and not only is she his apprentice, she and her father are skin-sliders, the last of their kind. In other words, they’re fey and can change their appearance at will. How cool is that? People have been getting sick and dying, and no one knows why. One day they’re fine, they come down with a fever, and bam. Dead. Only not. They wake up later in various states of zombiehood. And Evie is the latest victim. With her fey nature, Evie isn’t brain dead, nor is she exactly living, stuck in a limbo half-life. Just like our antihero, Lord Victor Lowell. She wakes up in a coffin on a ship bound to the sinister Lowell Island, somehow alive, and somehow mysteriously bonded to Victor. The sickness, the death, and her bond to Victor all seem connected, but Evie doesn’t know how.

Lowell Island is rumored to be filled with wild cannibals and evil magic, and the truth isn’t far off. The Lowell family rules the island and those unfortunate souls who die from the uncurable sickness only to wake up as zombies are brought to the island to work the plantation until a remedy is discovered by the gentle, honorable, hardworking island physician, Jessup. But the walls around the residence raise big questions, as do the bloodcurdling howls that echo beyond the walls, the flagging people serving the estate, and the malevolent statue overseeing them all. But once Evie meets Victor, the line between right and wrong is smudged in a big way. He’s traded part of his soul  for a dark magic that sustains him, and only Evie can save him, a hard task since she doesn’t even know how to save herself.

“Between the quilt of fire, his gaze and hands, she was hunger and smoke and stormy seas.”

This isn’t a sweet romance by any stretch. There are glimpses into the darkest part of human nature. There are moments that make you shudder (zombies can do that…although I assure you the romance scenes contain no decaying body parts). There are moments that make you despair for everyone on the island. Good seems to fail when everything looks darkest. But the very end? Sweet indeed. If you’re looking for a unique tale in a dystopian setting unlike any other, characters that scratch and claw to survive and save each other, I hope you give Other Than a shot.

Mia Jo Celeste comes from a family of writers and English teachers, so it was no surprise when she chose to pursue both careers. She grew up watching horror movies and reading romances. To her, the two genres go together like salty and sweet in kettle corn. 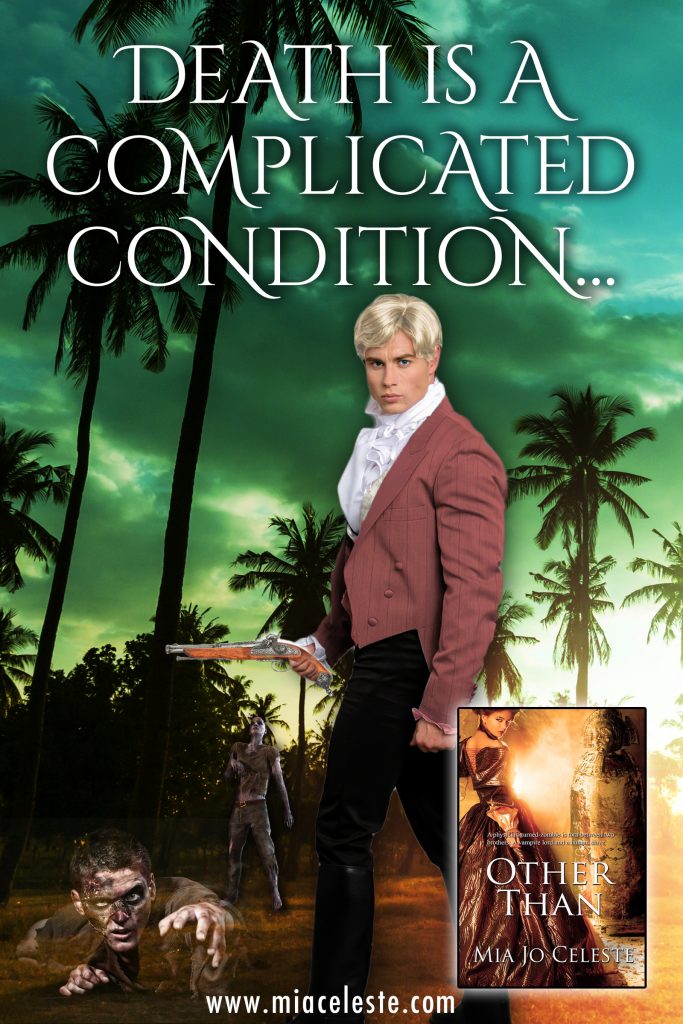