I’m so psyched to share that Every Breath is out in the world today for all your grabby hands! It’s the second book in my steamy-sweet, small town series, Music, Love and Other Miseries and continues the spark that started between Gia and Ian in Every Kiss.

What reviewers are saying:

It [Every Breath] is another 5 stars from me for this one, it is a great series and I have given all three books in the series 5 stars – this is another book that I will be very highly recommending!

When I started reading I couldn’t put it down.  You should definitely read this book. Can’t wait for the next book.

Ian is the perfect Prince Charming with the complex that he can never live up to that title where Gia is the perfect princess hiding behind a glitter girl persona who thinks with the death of Joey she will never have a chance at another happily ever after. I loved the character development and how it all played out in front of our eyes. C.J. Burright got it completely right with this series. 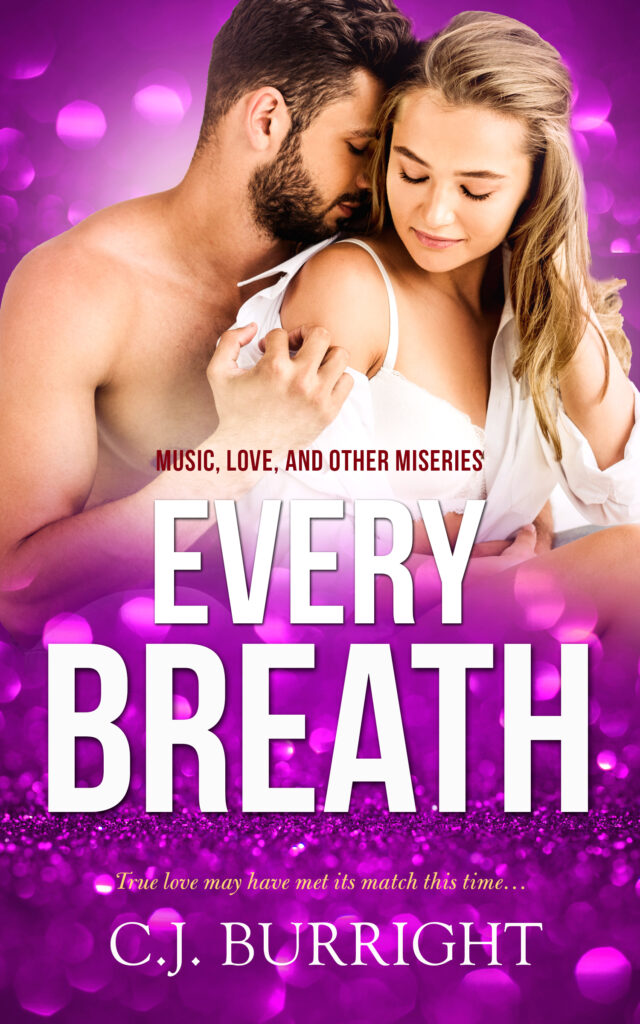 Book two in the Music, Love and Other Miseries series

She wants the full fairy tale. He’s no prince offering a happily ever after. True love may have met its match this time.

True love… Happily ever after… The full meal-deal fairy tale… Glamour girl Gia Hellman almost had it all until death stole the love of her life. Two years and a string of dead-end hook-ups later, she’s through fooling around. Love will be hers again, but sexy, one-night-only lawyer Ian O’Connor doesn’t fit into the equation. No matter how charming or tempting, he’s neither knight nor prince, and she’s done kissing frogs.

Prestige… Power… A pristine reputation… Ian O’Connor allows nothing to derail his goal of becoming the next partner in the most distinguished firm in town, not even Gia, the curvy vixen in sparkles and pink stilettos who haunts his fantasies. With a past full of long-buried secrets, he never breaks his rule of only one night with any woman. But when the case to propel Ian to the top requires working with Gia, and a slip-up results in a fake engagement, keeping his distance may be the trial of his life.

As the passion between them builds and rules break one by one, Ian must decide between protecting a secret that could destroy him or risking it all for Gia’s dream of happily ever after. If only Ian believed in fairy-tale endings…