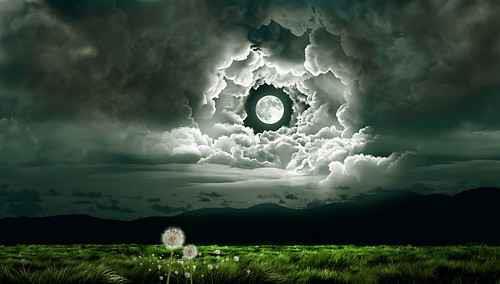 Tonight is my—our—last chance to escape.

A bead of moisture slid down the back of Cala’s neck in an icy finger.  She blended into the shadows and pressed her back against the stone wall.  The Queen’s patrol marched by without slowing.  So many guards tonight, even in the catacombs, almost as if Diana suspected.

She shook off the notion.  No, if Diana had caught even a hint of her doings, she’d be dead.  Tortured first, but still dead.  And Thorne…

His fate rested in her hands.

The hollow echo of footsteps faded in the distance, and the silence of the dead descended.  Cala darted from her hiding spot, slipping through the darkness.  Ebony skirts swirled about her ankles, quiet as a rat scampering across stone.  The smoky-sweet scent of magic pulsed through the air, almost palpable in its strength.  The raven-blood moon didn’t limit its range to the open air or the most powerful spell-casters.  Its gift soaked into the earth, oozing through the cracks to reach even those creatures cringing in the deepest, darkest corners.  Her mouth quirked.  Even to her.

But tonight wasn’t for cowards, and she couldn’t afford to fail.  Not again.

Beneath her boots, smooth tile changed to scattered stone.  Cala picked a path across the ancient, unkempt section of catacombs.  Unimportant ancestors—names long lost to the living—rested here in dust and decay, abandoned and forgotten.  She, however, knew them all.  They had nurtured and concealed when the above world, her own family, had forsaken her.

She dragged fingertips over chipped and flaking stone, tears stinging her eyes.  She’d never forget, no matter the distance.  Their legacies would go with her.

Cala clenched her jaw.  If wasn’t an option.  Victory or death.

Rubble replaced neglected tunnels and decrepit tombs, and Cala reached the end of the catacombs.  Stale air swept across her face, smelling of mold and dead mice.  She squeezed into the broken opening of the final tomb.

Slithering on her belly, she flinched at the dull clack of disturbed bones.  An invisible hand caressed her cheek, an encouraging, accepting touch.

“Thank you for understanding, Henry,” she whispered.  “This is the last time, I promise you.”

Phantom fingers pinched her bottom, and she squeaked.  “Pervert!”

Faint laughter brushed at her ear then faded away.

“Infuriating spirits,” she muttered, trying to sound sour and failing.  Apparently, the raven-blood moon empowered the dead too.