Please bask in the Lisa T. Cresswell author spotlight with me.  I read her new release, Hush Puppy.  Adored it.  Couldn’t put it down. Skipped my work out to finish it, and that’s saying somethin’ (don’t tell Tony Horton). 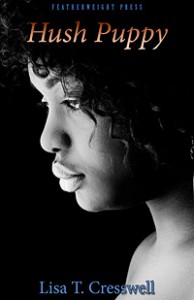 I know you want the blurb, so here it is:

Hush Puppy is the story of Corrine Lamb, a seventeen year old black girl, and Jamie Armstrong, a poor white boy, living in a backwater North Carolina town. Intelligent Corrine, abandoned by her mother, and artsy Jamie, forced to play football by a redneck father, both dream of leaving their podunk town and never looking back.

Their shared love of literature and a dream of a better life brings them together and a romance blossoms between them in a secret place of their own in the steamy North Carolina woods. When Jamie is involved in the accidental death of a white girl, he’s terrified of his abusive father. Corrine takes the blame to protect Jamie, with dire consequences for herself and her dreams of the future. Her life in danger, Corrine’s left wondering if Jamie ever cared about her at all.

The events surrounding the death of Trayvon Martin underscore how prevalent fear and hate still is in our country. Sadly, many of the themes explored in Hush Puppy are extremely relevant to today’s youth. It’s my hope that Hush Puppy is a story not only about poverty and race, but about hope, friendship, and the power of love.

I even asked Lisa a few random questions, which she was kind enough to answer:

What books did you love growing up?  I actually loved Shakespeare plays.  I adapted “Antony and Cleopatra” into a play in 5th grade and my class put it on. It’s no wonder Shakespeare crept into my current novel, Hush Puppy.  I also enjoyed the Anne of Green Gables series a lot, mainly because Anne is such a wonderful, hopeful, inspiring character.  She loves literature like me.

Do you have a next book in the works?  If so, what is it about? I just made a deal with Month9Books for a scifi fantasy book called Vessel.  It will be edited over the next year and is slated to come out in early 2015.  Vessel is about a disfigured slave girl living in a future world where books are burned as heresy and all knowledge is controlled by the ruling elite.  I had a ball working on it.

If your book was being turned into a movie and there’s one scene not necessary to the plot that you’d still want in the movie, which one would it be?  If Hush Puppy was ever made into a film, I’d probably just die of happiness.  It’s hard to pick a scene unnecessary to the plot, since I work very hard to make sure every scene I write has a purpose.  I imagine some of the more gushy love scenes could be cut, but that would be a travesty in my opinion.

Favorite social media outlet? Twitter by far. I have to make myself “do” Facebook and I don’t think I do it very well.  I love Twitter because I can meet so many different kinds of people all over the world that share my interests specifically.  I’ve made best friends for life on Twitter, no lie. It will always have a special place in my heart.

Sandals, sneakers, or heels?  Ah, actually boots.  I’m an archaeologist by profession and I’m a huge fan of boots, both field work/hiking boots and the dressy kind. I have an ever growing collection!

Here are all the spots to get your own copy of Hush Puppy:  All Romance, Kobo, Barnes & Noble, and of course, the mighty Amazon. 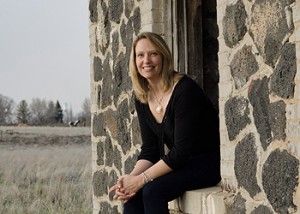 Lisa, like most writers, began scribbling silly notes, stories, and poems at a very young age. Born in North Carolina, the South proved fertile ground to her imagination with its beautiful white sand beaches and red earth. In fifth grade, she wrote, directed and starred in a play “The Queen of the Nile” at school, despite the fact that she is decidedly un-Egyptian looking. Perhaps that’s why she went on to become a real life archaeologist?

Unexpectedly transplanted to Idaho as a teenager, Lisa learned to love the desert and the wide open skies out West. This is where her interest in cultures, both ancient and living, really took root, and she became a Great Basin archaeologist. However, the itch to write never did leave for long. Her first books became the middle grade fantasy trilogy, The Storyteller Series. Her first traditionally published work, Hush Puppy, is now available from Featherweight Press.

Lisa still lives in Idaho with her family and a menagerie of furry critters that includes way too many llamas!