Please welcome my friend and amazing author Traci Douglass! I first met Traci in the Futuristic, Fantasy & Paranormal Mud Puddle and have had the great pleasure of reading first (and final) versions of her Seven Seals books. Traci is a sweetie with a wicked sense of humor, and you don’t want to miss out on her smoking Scions and their action-packed tales. TODAY ONLY, NOVEMBER 13, DOWNLOAD SEAL OF DESTINY FOR FREE!!! Seal of Awakening is number three in the series and hot off the press. Personally, I’m anxiously awaiting Xander’s story…which (of course) will be book number 7. Write faster, Traci! 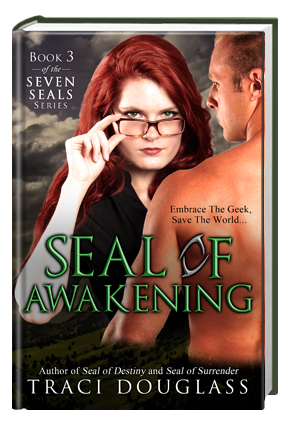 Blurb:  Socially awkward geneticist Quinn Strickland has willingly forgone the pleasures in life to reach her career objectives. Alone and approaching thirty, she uses her independence to mitigate any risk of a broken heart. Her strategy works until the day a handsome stranger bursts into her lab and her orderly plans shoot straight to Hades. He claims to be her personal divine protector, a powerful, ancient warrior sent to defend a prophetic time bomb existing within her own genetic code.

The Scion’s alpha-geek Wyck is offered the opportunity of his immortal lifetime as head of his own covert operation. He arrives at a Colorado lab expecting starched white coats and sterile surroundings—not a redheaded spitfire in charge of both his project and his libido. His skills have carried him from the battlefields of ancient England to the pits of Hell and he has no plans to be felled by one woman, regardless of her shag-worthy charms. Divine duty requires him to protect the apocalyptic Seal encrypted within Quinn’s DNA, but his heart has other ideas. When his personal feelings interfere with his age-old vendetta, he’s forced to decide between desire and retribution.

All three Seven Seals books are available here, linked for your buying ease :):

1.  If you could pick any of the Scion boys to spend a guilt-free, no strings attached night with (whip cream and wine included), who would it be and why?

Well, that would have to be Xander. He’s just so dark and mysterious and tortured and sexilicious. And yeah, we’d need wine and whipped cream… lots and lots of whipped cream ***fans self*** And maybe strings too…

CJ:  Yep, excellent choice…although I may have to fight you for him.

2.  If you could possess any super power, what would it be and why?

Oh, great question! For me, it’s a close call between being invisible and being able to read minds, but I think I’d pick invisibility. You could anywhere and see everything. Not sure I’d always want to know what other people were thinking…

CJ:  But do you really want to know what people do in private? Yeah…no.

3.  If you could choose any of the ladies from your Seals books for a BFF, who would you pick and why?

Of my current heroines, I think I’d pick Mira. She’s a gal who can take care of herself and can kick some serious ass when she needs to. My kinda gal. 😀

4.  Who would you rather have rule the world, Lucifer or the Nephilim (the versions from your stories, of course)?

Ha! Talk about rock and hard place, eh? Well, between those two I’d have to pick my Lucifer. He’s obnoxious and self-centered and completely untrustworthy, but at least he knows how to party. The Nephilim have not perfected the art of relaxation. At all. A bit too uptight for my tastes.

CJ:  While evil, he has a sense of humor…

5.  Are you planning any prequels to the Seven Seals novels revealing how each of the Scion boys were chosen by Divinity?

Yes. I plan on releasing a novella, between books four and five, a sort of Scion: Origins type of thing. Each of the warriors has their own unique story about ‘The Call’ and I’ve been saving them up for just such an occasion! Hopefully readers will want to learn more about Divinity’s mysterious band of brothers… 🙂

CJ:  I definitely do!

Thanks so much for having me on today, CJ! Great questions and great fun!

CJ:  And thanks for humoring me, Traci – you’re awesome! 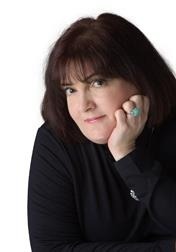 More about Traci Douglass:  Traci is the author of paranormal romance/urban fantasy and contemporary romances featuring a sly, urban edge, including her current Seven Seals series. Her stories feature sizzling alpha-male heroes full of dark humor, quick wits and major attitudes; smart, independent heroines who always give as good as they get; and scrumptiously evil villains who are—more often than not—bent on world destruction. She enjoys weaving ancient curses and mythology, modern science and old religion, and great dialogue together to build red-hot, sizzling chemistry between her main characters.

She is an active member of Romance Writers of America (RWA), Indiana Romance Writers of America (IRWA) and Fantasy, Futuristic & Paranormal Writers (FF&P) and is pursuing a Masters of Fine Arts degree in Writing Popular Fiction through Seton Hill University. Her stories have made the final rounds in several RWA chapter contests, including the 2012 Duel on the Delta, the 2012 Molly Awards, and the 2012 Catherine Awards. An earlier draft of the first book in the Seven Seals Series, Seal of Destiny, won the paranormal category of the 2012 Marlene Awards sponsored by the Washington Romance Writers.

Other current projects include upcoming books in the Seven Seals series, a new contemporary novella series due out in early 2014, and a new futuristic suspense series with hints of the paranormal and plenty of romance.

She loves hearing from readers! Connect with Traci here: