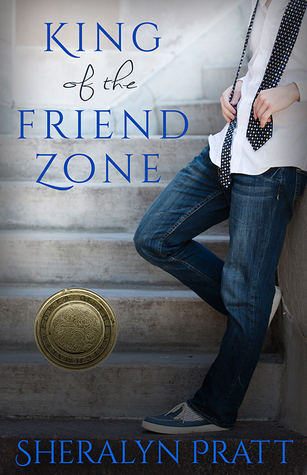 From the Power of the Matchmaker series:

Esme Taylor has an amazing fiancé, a lifelong best friend, and a problem.

The problem stems from the fact that her best friend is named Hunter and, well. . .he’s kind of (totally) hot. It’s hate at first sight when her fiancé, Jon, and Hunter meet. Jon’s convinced that Hunter is in love with Esme, and that Hunter must be out of the picture if their upcoming marriage is to succeed.

The truth is, Jon’s not that far off. Hunter is in love with his best friend and always has been. What Jon has wrong, however, is that Hunter never had any plans of ruining Esme’s happily ever after. Hunter wants what’s best for Esme, even if that’s not him.

When Jon pushes hard to end Esme and Hunter’s friendship, opposition comes from the most unlikely of places. It’s an eccentric lady with a cookie cart who suggests a different solution to Esme’s problem: Hunter and Esme should give each other a chance.

They’ve both thought of the possibility over the years—of course they have. But with a ring already on Esme’s finger and a heap of hurt feelings and broken trust in the mix, there hasn’t been a worse time to explore the depths of their feelings for each other.

Both Esme and Hunter think it’s time to move on and leave childhood crushes in the past. The question is: Can one woman and the taste of one cookie change their minds?

King of the Friend Zone is the first book I’ve read by this author, and it was such a fun, quick read. I finished in two nights! So…Esme and Hunter have been best friends for all their lives, growing up together, hanging together, teasing each other, a BFF relationship with zero romance along the way, a deep connection that not everyone understands. One such person who misunderstands is Esme’s new fiance, Jon. Then again, maybe he understands what Esme refuses to see, that Hunter is head over heels for Esme.

Hunter is awesome – such a guy’s guy! He’s a fireman who works out all the time, hangs with the boys, calls ’em like he sees ’em, and has no problem catching every woman’s eye…with the exception of Esme, the one woman he wants. But what’s so great about Hunter is he’s willing to step back and keep his heart ziplocked if it means Esme’s happiness. Aw. But it was also frustrating because dude, that’s a big secret to keep forever without ever exploring the possibilities. Still, I understood why he did it. It’s TOUGH going from friends to lovers and then back to friends, and he’d prefer to keep his friend rather than risk loving her and losing her.

Until Jon puts the kibosh on Esme’s and Hunter’s lifelong friendship. What a douchebag. All the characters kept saying how nice Jon was, but he seriously wasn’t, and the fact that Esme allowed him to affect her friendship with Hunter is what took the book down from a five star for me. She comes across as strong and sassy in every other area of her life, then lets her fiance/boyfriend of six months damage her relationship with Hunter, her best friend from day one. It just didn’t ring true for me. I could see that it would cause some tension, but to just diminish such a deep friendship for a guy you’ve known for six months? I don’t think so.

But besides that little quibble, it was a great read for me. I chuckled out loud a few times, and there’s a matchmaker cookie lady! She was awesome, and it looks like she makes appearances in the rest of the books, which I love. All the secondary characters were great and made me want to read their stories too.  If you’re looking for a cute, quick read with sweet romance and cookies with special love ingredients, check out King of the Friend Zone!

Sheralyn was born at an early age, with 10 fingers and 10 toes. She is proud to report that she currently retains all 20 digits. Described by one reviewer as “the bomb dot com” (url already claimed… bummer), Sheralyn has been a karate instructor, musical theater performer, a beach bum, freelance writer, nomadic traveler, and, yes, a private investigator. At the moment she enjoys working with and training her dog to give the poor thing breaks from sitting and Sheralyn’s feet with the unbearable task of watching someone write a book.

Really, and you thought your job was bad!

Sheralyn currently resides in Salt Lake City, Utah, although as people who know her can attest to, that is subject to change at any time 😉